Punakha Dzongkhag has been inextricably linked with momentous occasions in Bhutanese history. It served as the capital of the country from 1637 to 1907 and the first national assembly was hosted here in 1953. It is the second oldest and second largest dzong in Bhutan and one of the most majestic structures in the country.

On October 13, 2011, the wedding of the King of Bhutan, Jigme Khesar Namgyel Wangchuck, and his fiancé, Jetsun Pema, was held at the Punakha Dzong. 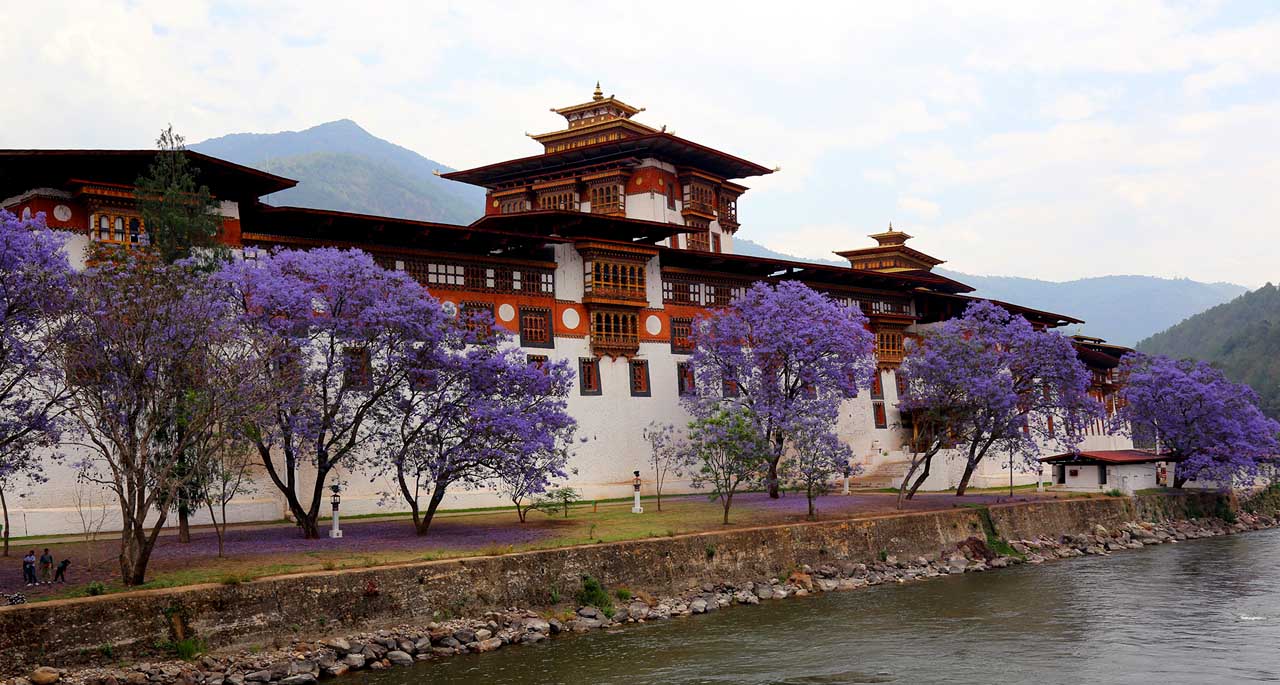 Punakha valley has a pleasant climate with warm winters and hot summers. It is located at an average elevation of 1200 meters above sea level. Owing to the favorable climatic conditions, rice grows very well in this region and is the main cash crop cultivated here.

Two major rivers in Bhutan the Pho Chhu and Mo Chhu converge in this valley. Punakha Dzong is built at the confluence of these two rivers and is an especially beautiful sight on sunny days with sunlight reflecting off the water onto its white-washed walls.

In addition to its structural beauty, Punakha Dzong is notable for containing the preserved remains of Zhabdrung Ngawang Namgyal, the unifier of Bhutan as well as a sacred relic known as the Ranjung Karsapani. This relic is a self-created image of Avalokiteswara that miraculously emerged from the vertebrae of Tsangpa Gyarey the founder of the Drukpa School when he was cremated.

Chimi Lhakhang, also known as Chime Lhakhang or Monastery or temple, is a Buddhist monastery in Punakha District, Bhutan. Located near Lobesa, it stands on a round hillock and was built in 1499 by the 14th Drukpa hierarch, Ngawang Choegyel, after the site was blessed by the “Divine Madman” the maverick saint Drukpa Kunley (1455–1529) who built a chorten on the site.

In founding the site it is said that Lama Kunley subdued a demon of Dochu La with his “magic thunderbolt of wisdom” and trapped it in a rock at the location close to where the chorten now stands. He was known as the “Mad Saint” or “Divine Madman” for his unorthodox ways of teaching Buddhism by singing, humor and outrageous behavior, which amounted to being bizarre, shocking and with sexual overtones. He is also the saint who advocated the use of phallus symbols as paintings on walls and as flying carved wooden phalluseson housetops at four corners of the eaves. The monastery is the repository of the original wooden symbol of the phallus that Kunley brought from Tibet. This wooden phallus is decorated with a silver handle and is used to bless people who visit the monastery on pilgrimage, particularly women seeking blessings to beget children. The tradition at the monastery is to strike pilgrims on the head with a 10-inch (25 cm) wooden phallus (erect penis). Traditionally symbols of an erect penis in Bhutan have been intended to drive away the evil eye and malicious gossip

The Punakha Dzong, also known as Pungtang Dewa Chhenbi Phodrang (meaning “the palace of great happiness or bliss”), is the administrative center of Punakha District in Punakha, Bhutan. Constructed by Ngawang Namgyal, 1st Zhabdrung Rinpoche, in 1637–38, it is the second oldest and second largest dzong in Bhutan and one of its most majestic structures. The dzong houses the sacred relics of the Southern Drukpa Lineage of the Kagyu school of Tibetan Buddhism, including the Rangjung Kasarpani and the sacred remains of Ngawang Namgyal and the tertön Pema Lingpa.

Punakha Dzong was the administrative center and the seat of the Government of Bhutan until 1955 when the capital was moved to Thimphu. It is listed as a tentative site in Bhutan’s Tentative List for UNESCO inclusion.