Paro valley extends from the confluence of the Paro Chhu and the Wang Chhu rivers at Chuzom upto Mt. Jomolhari at the Tibetan border to the North. This picturesque region is one of the widest valleys in the kingdom and is covered in fertile rice fields and has a beautiful, crystalline river meandering down the valley. 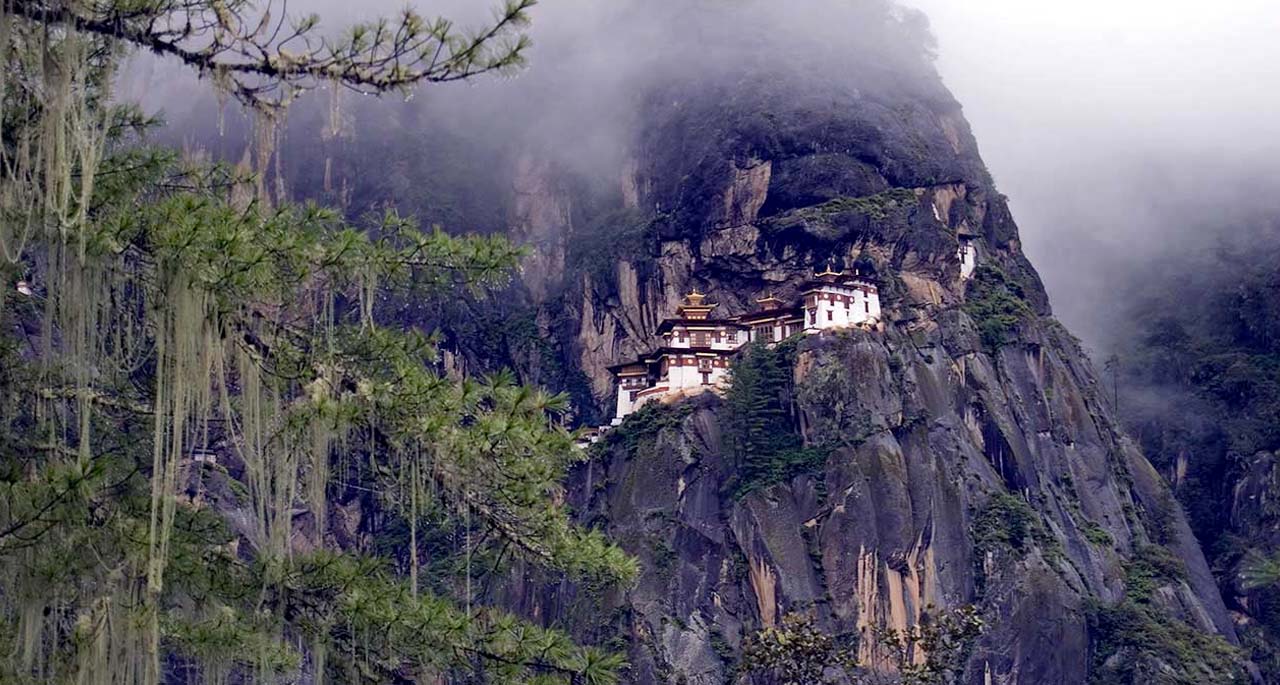 Accentuating the natural beauty are the many elegant, traditional-style houses that dot the valley and surrounding hills. Paro town has been growing rapidly in recent years and there are plenty of restaurants, bakeries, and cafes to choose from. One of the distinctive features of Paro town is that it is situated in a flat valley bottom and follows a grid-like pattern. The central plaza is adorned with a large prayer wheel and a small amphitheater at which events such as concerts are often organized.

Visitors often spend several days in Paro as there are over 155 temples and monasteries in this area, some dating as far back as 14th century. Among them is the temple that is considered Bhutan’s most iconic landmark Taktsang Monastery, the Tiger’s Nest. This awe-inspiring temple was constructed upon a sheer cliff face, hundreds of meters above forests of oak and rhododendrons and the valley floor. Dzongdrakha Temple and Kila Gompa are secondary examples of cliff-side temples that are also located in Paro Dzongkhag.

The country’s first international airport is located in Paro. Due to the close proximity of the airport and the many historical and religious sites in the region, there are a large number of luxurious, high-end tourist resorts in Paro.

Paro is also home to the National Museum. The museum is set in Paro Ta Dzong, an ancient watchtower that now displays hundreds of ancient Bhutanese artifacts and artwork including traditional costumes, armor, weaponry and handcrafted implements for daily life. The collection at the National Museum preserves a snap-shot of the rich cultural traditions of the country.

Another site worth visiting Paro is Drugyel dzong or The Fortress of the Victorious Bhutanese. This dzong was constructed by Zhabdrung Ngawang Namgyal in 1646 to commemorate his victory over marauding Tibetan armies. Though the fortress was destroyed by fire in 1951, the ruins remain an impressive and imposing sight.

Taktsang Lhakhang is Bhutan’s most iconic landmark and religious site. The name Taktsang translates to “The Tiger’s Nest”. This temple is one of the holiest sites in the kingdom and clings impossibly to a sheer cliff face 900 hundred meters above the Paro Valley.

It was first built in 1692 at a cave where Guru Rimpoche meditated in the 7th century A.D. Legend states that Guru Rimpoche flew to the site atop the back of a tigress and meditated in the cave for 3 years, 3 months, 3 days and 3 hours in order to subdue evil demons residing within it. The cave has been considered a sacred site ever since and many famous saints have travelled to meditate on it.

Taktsang Lhakhang is located approximately 10 km north of Paro town at an altitude of 3.120 meters. In order to arrive at the temple, visitors must trek for around 2-3 hours through beautiful, shady pine forests. No trip to Bhutan would be complete without a visit to this remarkable heritage site.