The Kingdom’s capital city is home to approximately 100,000 inhabitants including the Royal family. This bustling little city is the main center of commerce, religion, and government in the country.

Thimphu is the most modern city in Bhutan with an abundance of restaurants, internet cafes, nightclubs and shopping centers, however, it still retains its’ cultural identity and values amidst the signs of modernization.Thimphu is one of the few towns in Bhutan that have been equipped with ATM banking facilities and is a good place to stock up on some currency. 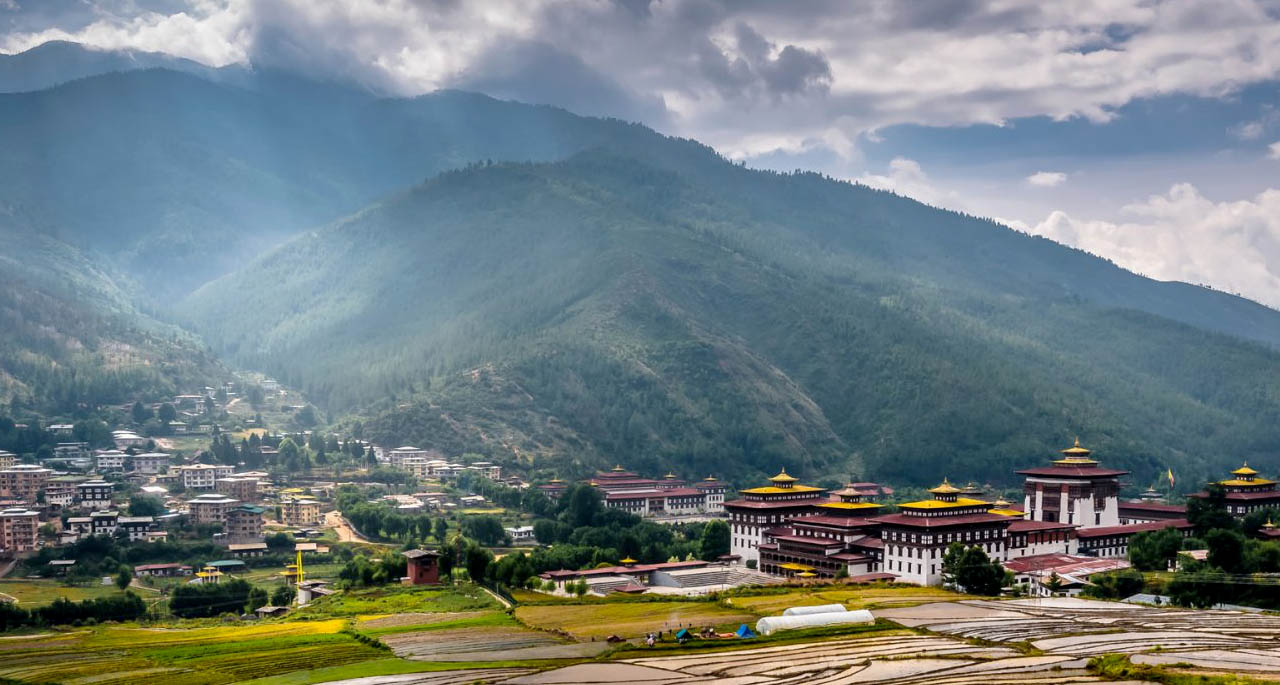 One of the most curious features of Thimphu is that it is the only capital city in the world that does not use traffic lights. Instead, a few major intersections have policemen standing in elaborately decorated booths (small pavilions), directing traffic with exaggerated hand motions. The juxtaposition of ancient tradition and modernity make Thimphu the ideal location for visitors to break away from their tour itinerary and just immerse themselves in the lifestyle of contemporary Bhutanese.

It was first constructed in 1216 A.D. by Lama Gyalwa Lhanangpa where Dechen Phodrang now stands above Thimphu.

In 1641 Zhabdrung Ngawang Namgyal acquired it but finding it too small, he built another one, known as the lower Dzong. The original dzong was destroyed by fire in 1771 and everything was moved to the lower dzong. The new building was later expanded several times over the years. It was damaged during an earthquake in 1897 and rebuilt in 1902. King Jigme Dorji Wangchuck had it completely renovated and enlarged over five years after he moved the capital to Thimpu in 1952 in traditional style using neither nails nor written plans.

Tashichho Dzong has been the seat of the government since 1952 and presently houses the throne room and offices of the king, the secretariat and the ministries of home affairs and finance. Other government departments are housed in buildings nearby.

The dzong is located close to Thimphu town, next to the banks of the Wangchhu River. It is an impressively large structure, surrounded by well-kept lawns and beautiful gardens.

It is a monument to the Third Druk Gyalpo and to World Peace.

Visitors will find elderly Bhutanese people circumambulating the Chorten throughout the day. Chorten literally means ‘Seat of Faith’ and Buddhists often call such monuments, the ‘Mind of Buddha’. The chorten is an extraordinary example of Buddhist architecture and artwork with its gorgeous paintings and intricate sculptures.

The chorten is a large white structure crowned with a golden spire. It is located close to the center of Thimphu city and is one of its most iconic monuments.

This massive statue of Shakyamuni measures in at a height of 51.5 meters, making it one of the largest statues of Buddha in the world. The statue is made of bronze and is gilded in gold. 125,000 smaller Buddha statues have been placed within the Buddha Dordenma statue, 100,000 8 inches tall and 25,000 12 inch tall statues respectively. Each of these thousands of Buddhas has also been cast in bronze and gilded. The throne that the Buddha Dordenma sits upon is a large meditation hall.

The Buddha Dordenma is located atop a hill in Kuenselphodrang Nature Park and overlooks the Southern entrance to Thimphu Valley. The statue fulfills an ancient prophecy dating back to the 8th century A.D that was discovered by Terton Pema Lingpa (Religious Treasure Discoverer) and is said to emanate an aura of peace and happiness to the entire world.

Dochula pass is located on the way to Punakha from Thimphu. The pass is a popular location for tourists as it offers a stunning 360-degree panoramic view of Himalayan mountain range. The view is especially scenic on clear, winter days with snowcapped mountains forming a majestic backdrop to the tranquility of the 108 chortens gracing the mountain pass.

Known as the Druk Wangyal Chortens- the construction of these108 chortens was commissioned by the eldest Queen Mother, Her Majesty Ashi Dorji Wangmo Wangchuk. The pass is also the popular spiritual destination for both locals and tourists because an important temple is located on the crest of Dochula pass
.
The Druk Wangyal Lhakhang (temple) was built in honor of His Majesty the fourth Druk Gyalpo, Jigme Singye Wangchuck. The past and future appear to merge in the details of the lhakhang (temple) and its structure tells the story of a supreme warrior figure, whose vision pierces the distant future in a fine blend of history and mythology.
Bhutanese families enjoy visiting the pass during holidays and weekends to picnic and simply enjoy the scenery. It is common to see families and groups of friends seated amongst the chortens, enjoying a packed lunch and hot tea. For tourists, this is an ideal location to capture beautiful pictures of the Himalayan mountain range during clear, warm days.