In the north-eastern corner of Bhutan lies the ancient region of Kurtoe or Lhuntse as it is known today. It is the ancestral home of our Kings and hosts several of the sacred sites of pilgrimage in the country. It is located 77 km from Mongar (3 hours’ drive) and is one of the most isolated districts in Bhutan. 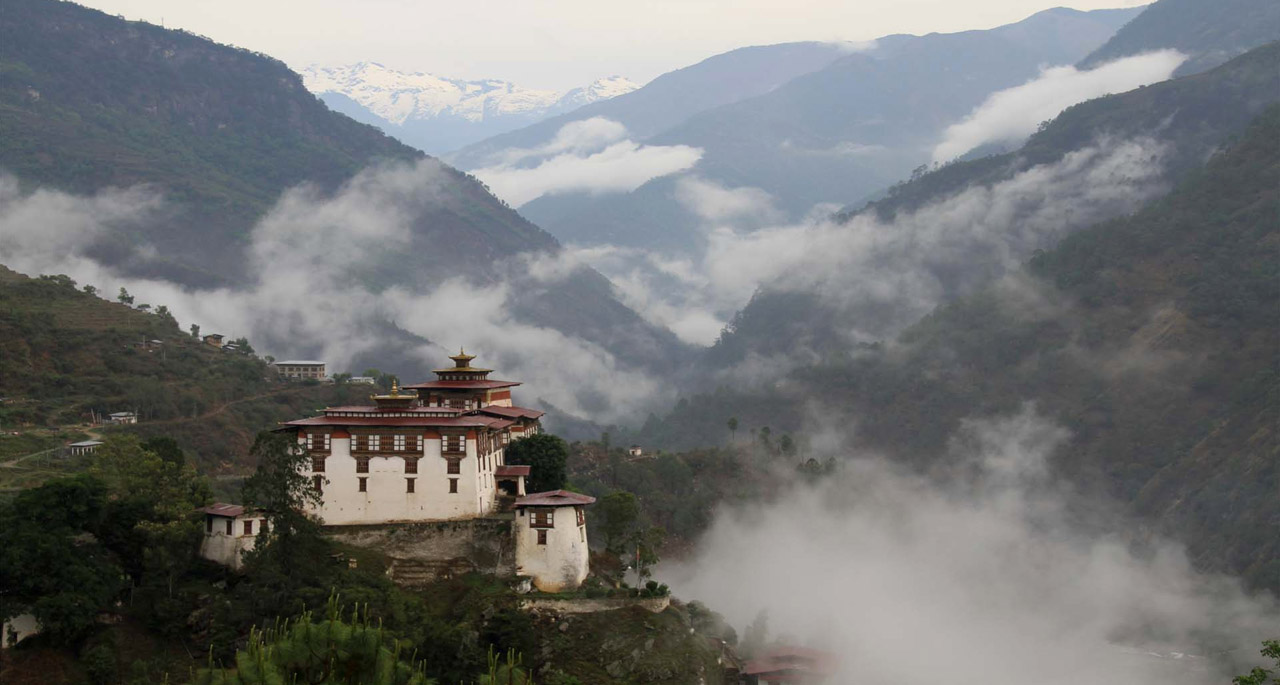 The landscape is spectacular, with stark cliffs towering above river gorges and dense coniferous forests. The region is famous for its weavers, and their distinctive textiles are generally considered to be the best in the country. Kurtoep women are especially adept at weaving a textile called Kishuthara.

This mighty fortress, popularly known as Lhundub Rinchentse sits upon a hill overlooking the Kurichu River. It was constructed in 1654 by the Trongsa Penlop Chogyal Minjur Tempa upon the site of an older temple built by Nagi Wangchuk in 1552. Today the dzong is the administrative and the religious centre of the district. It houses many sacred artifacts that were installed by the 4th Druk Desi Tenzin Rabgay.

The tiny village of Kilung is a twenty minute drive from the Dzong on the route towards Kurtoe Dungkharg . This village is inhabited by the Tshanglas who migrated and settled here during the late 1880’s. In the village you will come across the Kilung Lhakhang situated on a ridge overlooking the Kurichu River. It was built on the former site of the Kilung Gyalpo, a regional chieftain. This temple houses the sacred chain mall that was once used to recapture a statue that miraculously flew away from the Lhuentse Dzong.

This is another monastery that is definitely worth paying a visit. It was founded in the 18th century by Pekar Gyatso and until recently was under the patronage of the 16th Karmapa Rangjung Rigpe Dorji. The daughter of 1st King, Ashi Wangmo lived here at the monastery as a nun. The monastery is easily accessible from a feeder road.

The house of Dungkar, one of the noble lineages from Kurtoe was home to the Trongsa Penlop Jigme Namgyal, the father of the Wangchuck dynasty. Dungkar Naktshang the ancient home of the Dungkar Chojie and the ancestral home of the Wangchuck Dynasty, stands amid a scenic backdrop of towering mountains overlooking the tiny Dungkar village below. There is a 40km dirt road from Lhuentse leading up to Dungkar Lhakhang. The Dungkar expedition is an exciting and magical voyage into Bhutan’s past.

Gangzur village is situated around two kilometers from the Dzong. . This village is famous for its pottery as its women folk are skilled artisans of this dying art. The Government is now making efforts to revive it through financial support. When in Gangzur you will definitely want to witness the women displaying their skills.

This village is located about two hours walk from the Dzong. It is a pleasant journey taking you over gentle slopes amongst pine trees. This village is known throughout the country for its signature woven textile, the Kishuthara. The women sit in a row a makeshift textile cottage, weaving intricate designs and patterns. Picking up a Kishuthara here will be much cheaper than buying one from the handicraft shops in the capital.